A Reflection on the Month of Ramadan

When I stepped into our friend’s house and placed my freshly baked zucchini bread on the table, it occurred to me that I had never been to as many potluck dinners in the course of one month as I had during this month of Ramadan. I looked up from the table to a room full of friends in celebration, and I mirrored them by placing my right hand over my heart in a traditional Muslim greeting. How joyful it was to have this community and spiritual support during the past month of fasting from sunrise to sunset.

During the shared experience of fasting we all emerged from the month of Ramadan with unique experiences, which we recounted on Eid al-fitr, the festival of breaking the fast. Once again, we enjoyed tea and baked goods together, but this time during daylight hours. One couple shared how their son was so happy that mommy and daddy were done “frosting,” and could now eat dinner with him. As I listened to other’s tell stories, I began to reflect back on the beginning of the month.

There were many moments in the afternoons throughout the month that continuing to continue felt impossible. No matter how much water I drank before sunrise, a mild headache would develop around two in the afternoon. By the time I would get home from work I felt drained. This clearly effected my “ego filter” because my hunger would inevitably manifest itself into varying degrees of lashing out at home. I was a frightened rabbit, turned frightening wolf, all in the name of hunger.

Was it really that bad? From my perspective it was. Because my body was physically slowing down, everything felt exaggerated, including my own reactions. What I was capable of concealing in public, came out as confrontation in the comfort of home. This was the lowest version of myself lashing out for attention and begging to be fed. I could see that I was being unkind as the words would come out of my mouth. It seemed I couldn’t stop them until I fed the source. Our society has grown so accustom to eating unconsciously, and it suddenly made perfect sense that because probably half the time I ate was for comfort and not necessity. Food fed my ego. Now that I was starving my ego during the daylight hours, I would need to rest in a higher presence if I wanted to find any calm and peace within this undesirable cycle.

The practice of fasting during the month of Ramadan was about more than rediscovering my relationship with food, it was about intention. Being intentional in all relationships. As I write, I am reminded of Shaykh Hamza Yusuf’s presentation at the 2014 Festival of Faiths, when he spoke of the power of intention. He directly referred to the importance in the Islamic tradition of the intention in which food is prepared. He said, “Niyyah, the Arabic word for intention, also means seed. The seed of it is why we do something.”

Well, if the seed I was planting inside me was not being equally nourished with love and devotion while fasting continued to strip away my top soil façade, I was going to burn out. I knew from activities like gardening and yoga that persistence in a practice is the key. How I wished I had enough strength to continue my yoga practice throughout this month! So I found an audio recording online that would walk me through salaat, or Muslim prayer. Here was a yoga that would actually fill me with more energy.

I had been practicing salaat in group gatherings at sunset prayer for a few months, but I had never prayed in this way alone. Fr. Joe Mitchell, in his meditation classes at Earth & Spirit Center encouraged the class not to take him at his word, but to test the waters and practice meditation to find out the benefits for ourselves. I intellectually knew that meditation and prayer were rewarding, but to really be moved by a practice I had to actually practice. I intended to do salaat at least twice a day, and found creative ways to tuck away in private to do so.

I would be dishonest if I said I noticed something miraculously shifted inside of me; if only fasting had become easier. What I did experience though was a simple, yet somewhat profound, shift in attention. When my focus was consumed in the moment of prayer, hunger did not enter my mind. When my forehead was pressed to the floor, there was no headache begging me to lie down. So my practice continues, and before I enter into this childlike pose in prayer, or child’s pose in yoga, I remember what I am “frosting” from on a daily basis. 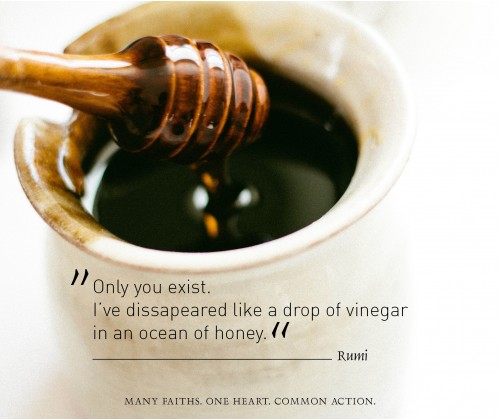 A Chicago native, Nicole moved to Louisville in early 2013 to work at the Center for Interfaith Relations. She studied public relations & advertising, and art & design at Purdue University.  It was in reading Fons Vitae Publishing’s Thomas Merton series that Nicole first became interested in learning about the different faith traditions.