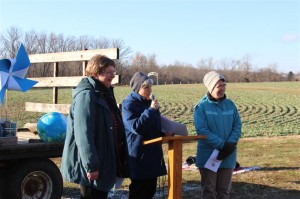 WHAT: Three religious communities in Kentucky’s “Holy Land” have co-authored an Energy Vision Statement that articulates the religious beliefs behind their work for clean energy solutions. They will release the statement at an interfaith prayer service, which will feature remarks on the call to reverence the sacredness of Earth in many faith traditions. To date, the statement has been signed by more than 60 faith communities and almost 500 individuals.

WHO: Statement co-authors are the Loretto Community, the Dominican Sisters of Peace and Associates, and the Sisters of Charity of Nazareth and Associates. Together these communities include some 1400 Sisters and 1000 Associates and Co-Members.
Prayer ritual presenters/speakers include:

Anne Walter: President of the Board of Directors of the Drepung Gomang Institute, Louisville’s Tibetan Buddhist Temple

All presenters available following the service for comments.

WHY: This year, these three religious communities have joined Kentucky landowners in a campaign to stop construction of the proposed Bluegrass Pipeline in their region. People around the country and beyond have applauded the Sisters’ activism, which culminated most recently in a 36,000-name petition against the pipeline delivered to Kentucky Gov. Steve Beshear. By sharing the spiritual and ecological principles that motivate the Sisters’ efforts, they hope to inspire more people of faith to take leadership in seeking alternatives to hydraulically fractured natural gas, tar sands oil and other fossil fuels.

VISUALS: The prayer ritual will take place on a family farm, outdoors, weather permitting.* Native American, Christian, Muslim, Jewish and Buddhist speakers – some in religious dress – will share the stage. The ritual will include symbols of extractive industries

* If inclement weather occurs, the Dec. 10 event will be moved inside to a nearby cabin on the farm. Regardless of the weather, hot chocolate and cookies will be served after the prayer service.